‘Straw burning should not be utilised in the manufacture of cheap electricity’.   Higgins says, ‘if utilised and processed properly it acts as a pesticide to all manner of crops in the UK and abroad.

In the same programme about ‘burning straw’, of November 28th of Farming Today broadcast by the BBC, it was stated that the Vine Weevil is causing 20 million pounds worth of damage in ornamentals alone in the UK.  Higgins team at the GGI  have developed a material HH-4, that contains nematodes, that stops this pest and it is based on straw. Therefore  Higgins says ‘ it is far more economical to utilise this straw as a pesticide than as a fuel for burning in power stations.’

Besides this, Higgins states that all other chemicals used in the effort to eliminate pests and diseases in agriculture would not be needed if this straw was utilised properly. This would save untold millions spent on crop protection through entimology and/or pesticides (either organic or chemical) and would also sequester millions of tones of carbon lost in Farming Today by not having to manufacture these chemicals. 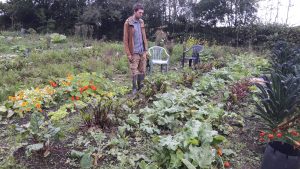 processed straw used as a pesticide 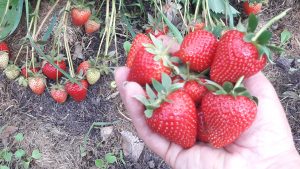 leave alone strawberries
do not rake them; do not dig them with the HH-2 Horticultural System 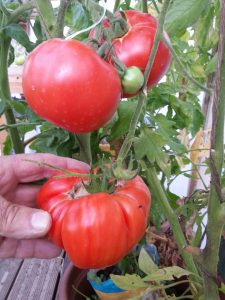 Altogether this reduces the carbon footprint to Zero or even carbon negative.

SO the real economy in farming would be to utilize straw in the manufacture of fertiliser and as a carbon zero  pesticide at the same time.

This edition of Farming Today included this news from Aston University:

….Pro-Vice-Chancellor and Executive Dean of School of Engineering and Applied Science, Professor Sarah Hainsworth said: “I am delighted that Patricia Thornley is taking on the role of Director of the European Bioenergy Research Institute succeeding Professor Tony Bridgwater. Patricia is a world leading researcher in the area of Bioenergy.

Richard Higgins Director of Howard-Higgins International Ltd., and Chairman of Good Gardeners International is a world leading researcher in fertility making to prevent agricultural pests and diseases. He visited Harper Adams University in 2017 and made a three hour presentation, on the subject of straw, to their top researchers.

Higgins has spent 25 years research on trials and demonstrations on the HH-2 method of carbon zero waste management and crop protection against pests and diseases.

Higgins answers the question ‘are your minerals going down the drain, or going up in smoke?’

His reply is ‘neither with the HH-2 technology no nutrients or trace elements are lost in the system by leaching or by being burnt. They are all captured and sequestered into the soil in record time in a stabilised form. Therefore this is the Greenest technology around and we’ve been doing it for 25 years.’